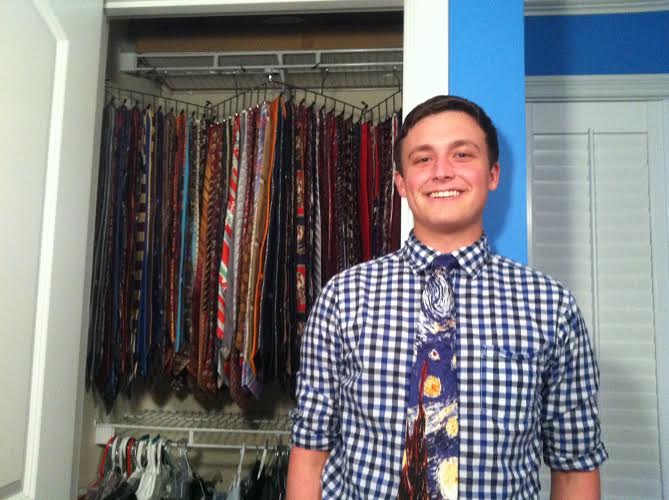 Wearing a tie, "Tie Guy" Michael Lepard stands in front of his closet filled with ties.

At least not until one day during Winter Break in seventh grade. It was his grandparents’ 50th wedding anniversary, and he was forced to wear one. His mom had bought the tie earlier that week, and he decided he would wear it to school.

On the first day back, Lepard decided he liked wearing this tie, and he continued to wear it for the rest of the week. Then he asked his mom for some more ties so he could have one for every day of the week. As he wore them more and more, people began to notice, and the rest is history.

This is how “Tie Guy” got his start.

Today, Lepard still wears his ties, but instead of five ties to rotate through, he has 144 ties to choose from.

“He has a tie for pretty much every day of school, so you won’t see him wear the same tie twice in one year, basically,” said junior Brady Moldrup, Lepard’s friend since 5th grade.

If Lepard not wearing a tie more than once in a school year isn’t shocking, here’s another quirk: he’s never bought a tie for himself.

With friends and family giving him ties left and right, Lepard’s collection will continue to grow, and he won’t have to be the one paying for it.

One major contributor to Lepard’s collection is Moldrup.

One day at a garage sale, Moldrup was looking through the items for sale when he noticed a table with a whole lot of ties. He looked at the price, and they were all $0.01 each. So he did what any other person would and grabbed them all.

Lepard’s birthday present that year from Moldrup was 34 ties. To this day, Moldrup is the one to beat in tie giving. He has given Lepard about half of his collection.

Another contributor to the collection is Lepard’s girlfriend junior Zoey Line.

“When we’re somewhere and he’s not wearing a tie, everyone freaks out because they’re like ‘The Tie Guy isn’t wearing his ties! Oh my gosh!’” Line said.

When Coach Cab had Lepard in class, he had a saying that he said when students asked him for supplies. Lepard decided to make Coach Cab a sign with his saying on it, so one day Lepard showed up to class with a sign that said “This isn’t Target” with a giant slash through the Target logo.

Lepard is a friend whose obsession switched from Legos to ties, according to Moldrup; he knows everything about Breaking Bad, according to Line; he is a memorable student who was “very helpful and participated in a lot of the discussions,” according to Coach Cab.

For a lot of people, Lepard is the “Tie Guy,” but for the lucky few that really know him for who he is, he is so much more than that.