Staff picks: We judge a book by its cover 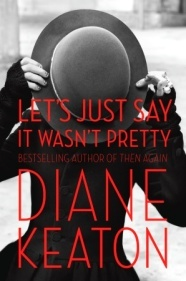 Although we have been told since we were children never to judge a book by its cover, The Bark staff decided to take a walk on the wild side and betray one of our most basic lessons. We judged this book by its cover and told to the best of our knowledge what the plot looks like. The fact that Let’s Just Say It Wasn’t Pretty written by Diane Keaton is most likely an autobiography is largely ignored in this piece.

A young girl was riding her bike down a wintry road admiring the snow-covered branches when she suddenly hits an icy patch and loses control. She flies over the handlebars and skids her previously angelic face on the rough concrete. Her face is marred forever by these deep gashes running down the length of her left cheek. Panicked and frightened, she runs to the circus that was temporarily performing in town because she assumes that her vain, perfect Donna Reed-esque mother will never love her after this. From the age of 12 to 14, the girl lives with the circus performing various acts all under the protection of a bowler hat that fits perfectly over her shredded face. At the age of 14, however, her odd, wondrous circus life goes awry when they return to her hometown and she must face the past. [Kelsey Kinzer]

So a girl named Diane Keaton wakes up one day to find that, much to her dismay, she has a hat stuck to her face. She struggles to get it off but to no avail. Her evil stepmother cast a spell that permanently stuck the hat to her face. How unfortunate. So Diane lives out the rest of her days running into the same wall over and over because she is an idiot. Eventually she finds some scissors and is able to cut eye holes into it and so she can see stuff. She finds her evil stepmother to get revenge. After that she lived out a fairly normal life. She ran a successful restaurant called Hatface’s Diner named for obvious reasons. The End [Graham Benefiel]

This is a book about Julia who is mocked for her oddly shaped nose throughout her entire grade-school career. As a graduation present, her parents let her get a nose job. The end result is even worse than her original nose, and Julia must face college with her unfortunate facial feature. Her roommate stays away from her, but Julia eventually finds a group that accepts her. The newfound friends rally together to raise money for a new surgery, but she decides she likes herself just the way she is and donates the money to charity. [Annie Smith]

Let’s Just Say It Wasn’t Pretty is an epic novel about Joan Rivers’s battle with plastic surgery. The book opens with Joan, a young and beautiful girl, flipping through fashion magazines and noticing all of the model’s perfect facial features. She starts to imagine what her own face would look like with a pointier nose and lifted eyebrows. She goes to a plastic surgeon and gets an entirely new face. Afterward, she realizes that she looks like a Halloween costume and she actually was beautiful before the surgery. For the rest of her life, she overcomes her struggles with her plastic face by wearing brightly colored furs bigger than her body and cracking jokes about other people to make herself feel better. The cover of the novel shows Joan hiding her face with an expensive hat. [Caroline Rogers]

This is a story told by a 30-year-old woman named Claire, who woke up one morning with leprosy. It just happened. Because of her disease, she’s shunned from her village with only a hat to hide her face. Eventually she meets a man named Tom, who thinks her hat is actually her face. Unfortunately, he finds out the truth on their wedding day, and he leaves Claire for her sister. The End. [Cameron Scott]

Izzy Gone has always felt estranged from her friends and family… likely because she is a descendant of Medusa; therefore, she can turn people into stone if they look into her eyes. Tired of being ostracized by her condition, Izzy decides to give in to her inhibitions and prey upon those who have mocked her. Using a hat to cover her sight from the innocent, Izzy tracks down her wrongdoers turning them into stone with a removal of her hat. How will it end? You will have to read to find out! [Tori Lafon]

Let’s Just Say It Wasn’t Pretty is a fictional novel written in a biographical style about the well-known actress, Patricia Port, who is cast in every prestigious movie. The only catch is that directors cast her for the fact that she is notoriously known for being hideously ugly. Every time she goes out in public, she hides her face from the paparazzi with a different hat. Finally, she becomes fed up with being used for her looks, or, rather, lack thereof. In order to get revenge, she devises a plan to host a party and poison every director who has ever cast her for her ugly appearance, leaving the corpses with hats covering their faces. The novel traces the motivations behind Patricia’s actions, making the plot feel like an actual biography tracking the psychology behind an actress turned killer. [Mackenzie Lee]

Elaine Emmett’s mother always told her not to make funny faces or cross her eyes because her face would get stuck that way. Because Elaine was a defiant child, she disregarded her mother’s warning, and to her surprise her face froze in that fashion. She became homeschooled and used a hat to cover her face if she was ever forced out into public. Her face was frozen that way until her new neighbor Charlie Charming fell in love with her due to her personality, and his love made her face go back to normal. It is a heart-warming tale about true love and inner beauty. It’s truly inspiring. [Zoey Line]