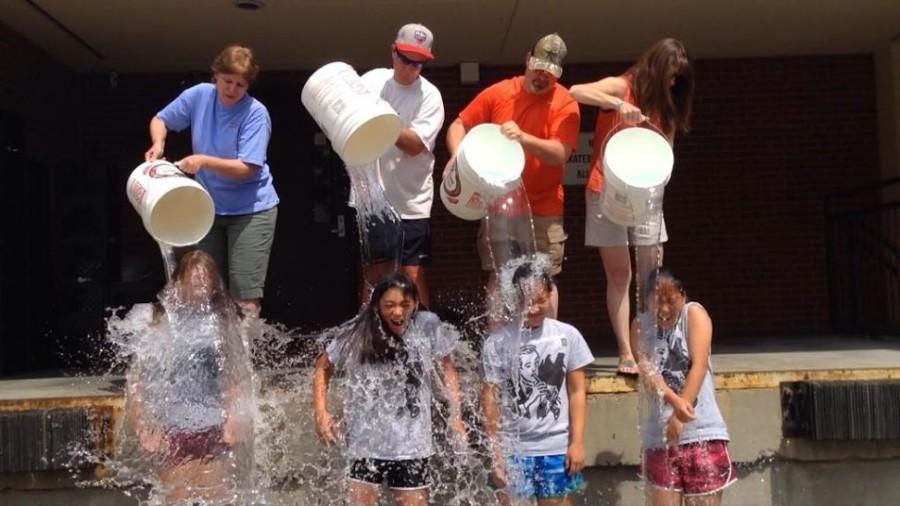 If you don’t know what the ALS Ice Bucket Challenge is, you either live under a rock or you don’t have social media.

The ALS ice bucket challenge has taken over Twitter, Instagram, and Facebook feeds all over the country. And the frenzy hasn’t skipped over Bearden High School.

Numerous students have been nominated to pour buckets of ice water over their heads and donate to ALS or Lou Gehrig’s disease research. The Bearden Singers class was nominated, and even principal Dr. John Bartlett himself was nominated to do the challenge.

“I just heard about the organization a few weeks ago,” Bearden chorus teacher Ms. Mary Sexton said. “I didn’t know we would get challenged, but I did it myself and challenged my own kids.”

The rules of the challenge go like this: one will pour ice water over his/her head, donate $10 to ALS, post a video online, and nominate three more people. Those nominated have to complete the challenge within 24 hours or donate $100.

At the beginning of school, drama teacher Mrs. Leann Dickson asked teachers to make bids and the highest bidder would have the honors of pouring the ice water on Dr. Bartlett. School psychologist Ms. Rebecca Doss won the privilege with a bid of $150, but she passed on that task to football coaches Morgan Shinlever and Brian Tanner. Dr. Bartlett responded by challenging Knox County Schools Superintendent Dr. Jim McIntyre, who participated at Bearden’s home football game on Aug. 22.

Many students around school have completed the challenge individually, including junior Ethan Partelow.

“I think it’s a really good cause and (the challenge) sounded like a really fun idea, and it was really hot that day, and I figured I may as well just cool off and have some fun,” Partelow said.

Both BHS chorus classes, Bearden Singers and Female acapella, were nominated by a BHS alumnus to complete the challenge, and there was a class-wide ice water dump.

“It was pretty rewarding getting to pour (the water) on Mrs. Sexton,” senior Sam Phillips said. “I’ve been with her for a lot of semesters, so it was fun to get to torture her a little bit.”

The organization as a whole has raised over $100 million thanks to the Ice Bucket Challenge as of Sept. 3, with many celebrities and common-folk alike donating every day, but some are concerned that the challenge has become a bit of a publicity stunt and the meaning has been lost in translation.

The point of pouring ice over one’s head is to temporarily feel the effects of ALS, which are tense, weak muscles and nerves; not many people know about this.

“I was nominated, but I didn’t want to be involved because I think that a lot of people are doing it as a publicity stunt instead of actually supporting a good cause,” Phillips said.

But raising money is only half the reason for the challenge. It has also raised awareness for ALS majorly.

“I hope that at least people are trying to raise awareness,” Partelow said, “but they should donate because it’s a really good cause, and there’s no reason not to.”