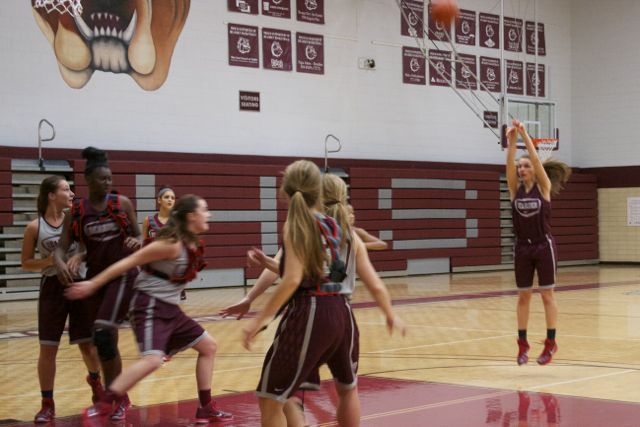 Most memorable basketball players have their greatness defined by the number of points, assists, or rebounds they record throughout their careers. However, some separate themselves with their extra effort and zeal for the game, and their contributions can’t be measured by the usual stats.

Senior Olivia Pfeifer is that type of game-changer for the Bearden’s girls basketball program, and to fully capture her contributions, statisticians would have to create some new categories.

“The special thing about Olivia is that she has been asked to do so much since she has got here,” Coach Justin Underwood said. “Her position has changed numerous times since she was a freshman.

“She has always put Bearden before her own goals and aspirations.”

For years, Pfeifer has helped lead the Lady Bulldogs with outstanding effort on the court. She is known for chasing after loose balls, taking charges, and fighting for rebounds; she also normally has the task of guarding the other team’s best player.

“[Winning loose balls] is not something as glamorous to a player or a casual fan, but from a coach’s perspective, she gives you more possessions,” Coach Underwood said. “It is something that raises the level of expectations for the girls around her.”

Bearden will have to adjust after the departure of last year’s talented senior class of Erin Walsh, Lexus Norwood, and Tyler Carter. Bearden finished 25-8 a year ago, and that same group took the Lady Bulldogs to the state tournament two years ago.

“We are trying to find an identity as a team because we graduated three players that played a lot of time for us,” Coach Underwood said.

Added Pfeifer: “Expectations are still high [this season]. We are still expected at Bearden to be good and to do well.”

Bearden will rely on a blend of new and veteran players to do so. This includes young talent such as freshman point guard Trinity Lee and sophomore post Isabell Soldner. In addition, returning juniors Chanler Geer and Holly Hagood look to help contribute to the team. Pfeifer is joined in the senior class Madison Rice and Katelyn McReynolds.

Bearden is off to a good start to the season with wins over Grace Christian and Grainger. They start district play at home against Lenoir City on Dec. 2.

Another aspect that separates Pfeifer from the pack is her outstanding performance off the court. Many have commended her for leadership abilities as well as her strong interest in academics.

“She is always there when you need her,” Rice said. “She picks you up when you’re sad, and celebrates with you when you’re happy.”

Added Pfeifer: “I wouldn’t call myself a try hard, but I guess that is what I am. I just make the effort to get the loose balls.”