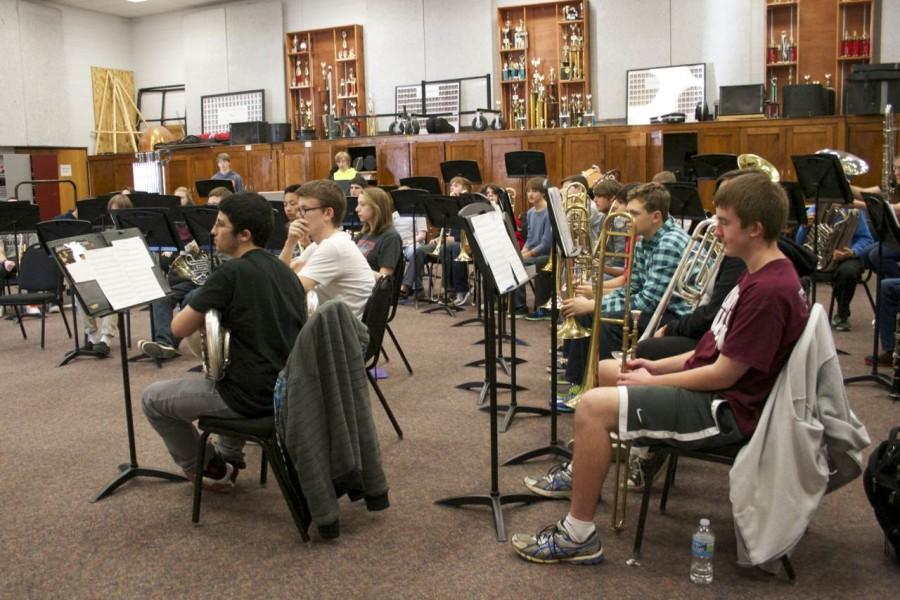 Bearden band students rehearse in the band room. Several were selected to participate with their peers in All-State East.

The Bearden band and orchestra have finished up their holiday concerts and are now moving their focus to preparing students for All-State East band.

All-State East is an event that recognizes 9th-12th grade musicians with superior performances skills. Each of these participants was evaluated by performing prepared musical selections, scales, and a never before seen sight-reading piece.

In band class, Mrs. Megan Christian and Mr. Jamie Wilson take every opportunity they can to practice scales and a sight-reading piece, but students independently do the majority of preparation for auditioning.

“Most of the students who auditioned from Bearden study with private instructors,” orchestra teacher Mrs. Cynthia Wright said.

More than 3,000 students in East Tennessee auditioned, and the judges chose those with the highest scores.

Grades 9-12 are all encouraged to audition. For many of the students, it’s their first time being a part of the ensemble.

“I’ve never been to All-East before,” cello player Rain Binger said. “This is my first year and it’s going to be really exciting to be with my friends for a weekend and play some really challenging music.”

Many students are returning this year and are really looking forward to it.

“I actually have a ton of fun doing it; it’s just something I enjoy,” senior trumpet player Trey Green said. “It keeps me interested and engaged.”

“I want to be a music major after high school, so having this on my record really helps me push myself up in the music world,” senior flute player Daynah Charlow said.

All-State East helps the students challenge themselves and meet different people throughout Tennessee.

“It’s an emotional outlet; it’s how I express myself,” senior double bass player Kaleb Keller said. “It’s good to do because you have other musicians that also practice and know what they are doing. It’s also good for making friends with people from other schools because there’s a similar interest.”

All of the students involved in All-State East Band are excited and looking forward to performing together. Their performances will be in Gatlinburg from Thursday through Saturday.