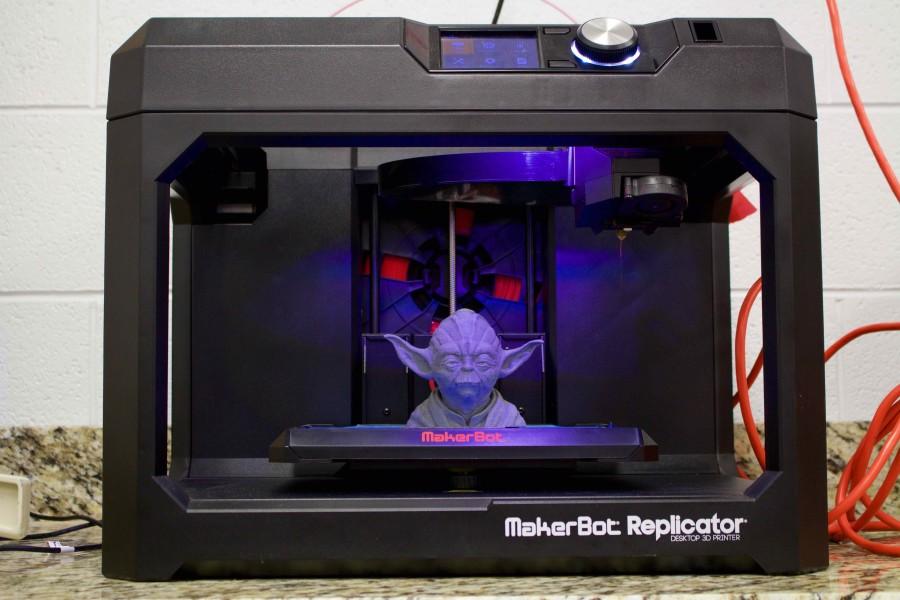 Make their own 3d objects, students can.

Last semester, Bearden High School received its own 3D printer. With this highly advanced piece of technology, students are able to create 3D objects in less than two hours, but students don’t seem to be taking advantage of this special experience yet.

Mrs. Kristen Heffern, one of the librarians, is in charge of 3D printing in the Maker Space Center. Mrs. Heffern understands that this process might seem intimidating for students that have never used it before.

“Students come in and say they want to use it, and they don’t know how so I show them,” she said. “Not many people realize they can use it and have no experience so [they] tend be intimidated.”

The printing process itself is quite interesting. The desired object is programed in and then once the plan is laid out, it starts to form the object. The object itself is made of plastic, wire-type material (in various colors) and is put into the printer through a clear tube that runs into the back of the machine to the arm forming the object. The material is then heated at 500 degrees and is layered on top of itself causing the wire to meld together.

Even though the printer has been used, Mrs. Heffern wants students to know that anyone has access to the printer, with a fee of 20 cents for every gram printed, because of the lack of new people willing to use it.

Mrs. Heffern isn’t the only one promoting the use of the printer. Mrs. Anna Boyd, one of the Visual Art teachers, has been trying to persuade her students to use this new technology for a learning experience.

Mrs. Boyd has only a few students that have really showed interest in this media form. The few that do are prompted to create original designs and pieces to show their creativity and design skills. For AP art students, they could add a 3D design to the portfolio which helps with showing their abilities in various visual forms.

Students seem to be worrying about the whole learning process that comes with the desire to print, but Mrs. Boyd has not used the printer herself and is trying to learn like many others including Mrs. Heffern. Students would learn about the process along with the teachers.

Cassidy Bailey, an advanced art student, is planning on using the printer for her portfolio this year. She will create an original line of couture monsters featuring creatures from the Scooby Doo TV series. Along with creating the costume designs, she will be in need of accessories ranging from earrings to headbands. Bailey plans on using the 3D printer for these special additions.

Bailey is not, however, the only art student being prompted to use the printer. Mrs. Victoria May, another art teacher, has announced that she will hold a competition that will relate to the 3D printing process.

Over the next semester, Mrs. May will closely monitor each of her students during class. She will take notice of things like helping other students or going above and beyond on a project. Each nine weeks, she will choose one student from each class and reward them.

“I want my art kids to know how to use it and that they have access to it,” she said.

The reward is that the student can print any object they desire and Mrs. May will pay, out of her own pocket, for the whole process.

So far students have been showing interest and Mrs. May has hope this will entice more students to visit the Maker Space Center.

“It’s bringing science and technology and art all together,” Mrs. May said.