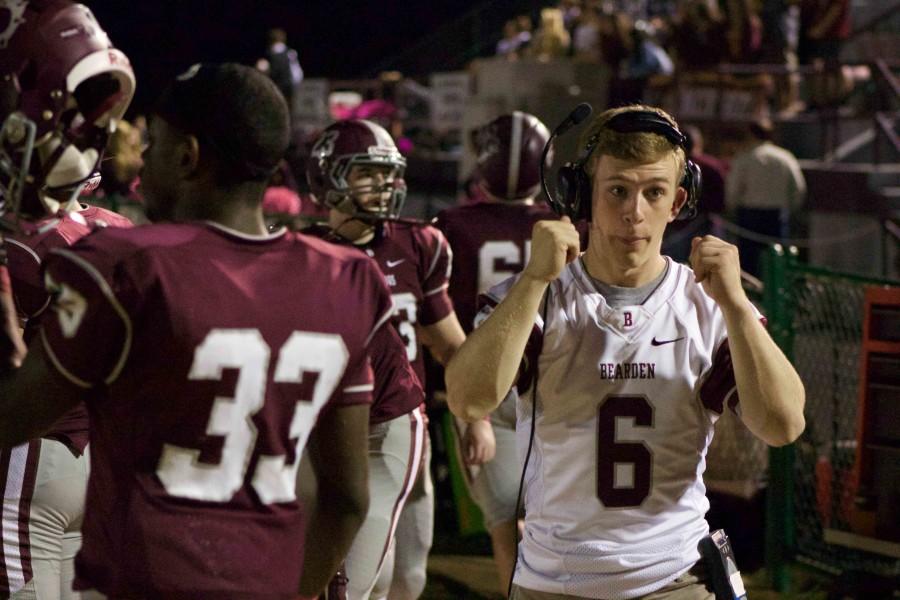 Senior Eli Derrington has had to quit playing football, but he's finding other ways to contribute.

It’s a challenge being a student and athlete. Finding that common ground between school and sports is hard for some and easy for others; students like senior Eli Derrington lead this double life.

Last month, the National Merit semifinalists were announced at the school. Derrington was among the nine semifinalists from Bearden.

“I felt great when I was announced as a National Merit Semifinalist,” Derrington said. “It was a validation of all the hard work and studying I’ve put into my school work for years.”

However, his is an interesting case because of his heavy involvement in sports at the school.

Along with being announced a semifinalist, Derrington played wide receiver for the Bearden football team, but due to a latent 3rd concussion he was not permitted to keep playing his position. Now, he finds his skills utilized during practices running drills and being a extra pair of hands whenever they’re needed.

Being an athlete and still keeping a successful school career takes certain things to keep that student balanced. Derrington noted that time management skills are a vital part in the machine.

“My time management skills have improved, so I haven’t had much difficulty at all,” Derrington said. “After practice, I go home each day and do my work, trying to cut out all the distractions so that I can focus.”

He also said that the skills that he has acquired over these years will help him in his future.

Derrington plans on studying aerospace engineering, and finding a dream job at NASA or a company like Lockheed Martin.

“Being a National Merit Semifinalist should help me get into a very prestigious school that will give me a great education and set me up for success,” Derrington said. “I believe I always give all the effort I can give towards everything I do.”