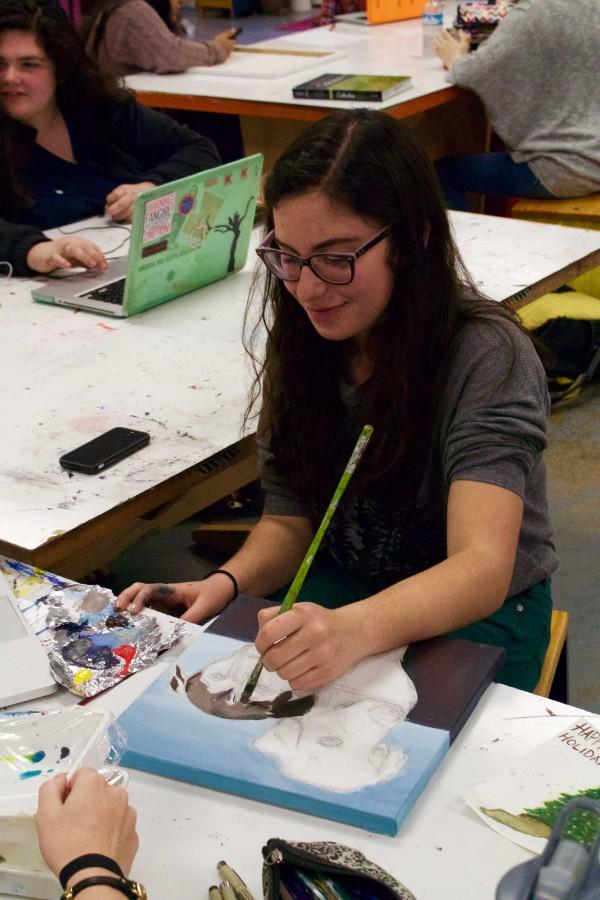 Bearden senior Esther Sitver works in the art room last week. Look for the senior's Best in Show artwork on a local billboard or at the Knoxville Museum of Art.

Most high school students pay little attention to the viral popularity of their parents’ Facebook posts, but in light of senior art student Esther Sitver’s winning the Knoxville Museum of Art’s Best in Show, it has become a significant part of her daily routine.

“My dad called everyone he knew, and he keeps telling me about all the likes he got,” Sitver said.

Sitver’s artwork is now featured on a local billboard in order to advertise its time on display at KMA.

While this billboard may attract the eye of many who are intrigued by its bold portrayal of two girls wielding pink and green hair and the troll-covered wallpaper in the background, it may go unknown to many of its spectators that this piece – by Bearden senior Esther Sitver – is making history.

Sitver is the first Bearden student to ever win the title of KMA’s Best in Show for the East Tennessee Regional Student Art Exhibition. As the winner, she was awarded a $500 dollar cash prize, as well as a permanent spot for her artwork in the museum’s Education Collection.

Curator of Education Ms. Rosalind Martin said that Sitver’s piece was the best overall out of nine categories according to the judges and noted the significance of receiving this honor.

“This annual exhibition provides the opportunity for students to participate in a juried exhibition and to have their artworks displayed in a professional art museum environment,” Ms. Martin said. “We are so delighted by the quality of the artworks, the dedication of the teachers, and the commitment of the museum staff to establish a museum/school tradition for our community.”

Sitver said that the judges explained her piece was chosen due to its difference from the past winning pieces that were darker in subject matter.

When it was announced that Sitver had won, she was shocked because she had not placed the prior year.

“I’m just still in a daze,” Sitver said. “It’s just so good, and you never expect it to happen.”

Art teacher Mrs. Anna Boyd said that for a Bearden student to be awarded such an honor, not only means big things for Sitver, but for the art department as a whole.

“For Bearden, I think it just shows what a great program that has been established for many years now and that many teachers and students have been very devoted to,” Mrs. Boyd said. “Moving on, we really want to continue to grow that love and support for the arts.”