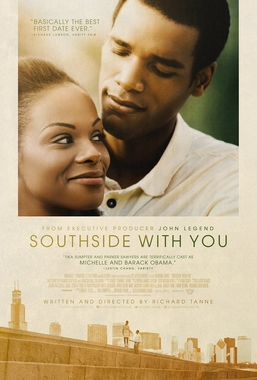 The movie opens on a young Michelle Robinson, eagerly getting ready for her “meeting” with the strapping and persistent Barack Obama, unknowing of the future that the two will one day share.

Southside With You candidly and successfully captures the first date of two of today’s most influential political figures.

Barack (Parker Sawyers) invites Michelle (Tika Sumpter) under the premise that their interaction is simply a meeting; however, Michelle soon warms up to the reality of the situation – that the two are, in fact, on a date.

Though the movie trailer seems to advertise the film as chronicling the relationship of the President and First Lady’s love story, I was pleasantly surprised to find out that it focuses entirely on their first date.

The movie was full of beautiful shots, some of which featured the pair strolling through a park having thoughtful conversations about religion and their families. Barack explains that his mother was white and married a black man and that his father died without reaching his full potential.

Despite the fact that the two have never really talked as friends outside the office, it’s obvious that they are naturally comfortable with each other.

When they actually do arrive at the meeting, Barack is begged to speak to the people in the church. He is met with complete silence as the congregation listens intently to every word.

I was so moved by the Sawyers’s authenticity during the speech that for a moment I confused him for the real Barack Obama.

I could tell by the absolute silence that was met with this scene in the theater that the scene moved more than just me.

Not only was the story told beautifully, but the actors in the film were well qualified.

Sumpter gave a beautiful performance and really seemed to make a connection with her character, and Sawyers suited his character so well, it almost seemed as if we were looking at a young Obama.

Not only were Sawyers looks well matched with the President, his way of speaking was also similar. Sumpter did not disappoint either. Both her voice and appearance were similar to the First Lady.

Overall, the film was one of the better films of the year, and it’s now one of my favorites.