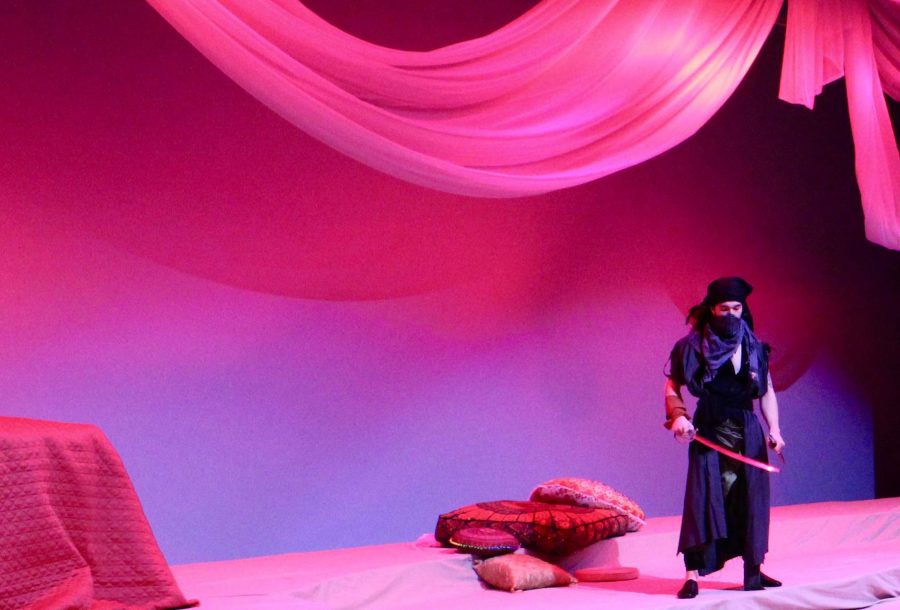 Pedro Lima designed the set for Bearden's production of Arabian Nights and also has a role in the show.

Bearden senior and longtime theatre veteran Pedro Lima is in charge of designing the set for the spring production of Arabian Nights.

While theatre teacher Mrs. Katie Alley is directing Arabian Nights, Lima has been given a great deal of responsibility and autonomy. Aside from being set crew head, Lima works as an assistant director, a scenic designer, and – toward the final stretch of development – a lighting designer.

“It’s an amazing process to be able to see the distinctions between different looks that I create on stage and the way they support the story,” Lima said.

“Mrs. Alley really wanted to capture the Arabian theme for this production and let Pedro run free with that to create the set, and we really wanted him to use the talents he has to make the show and the set the best we possibly could,” Keziah said.

Mrs. Alley said that Lima’s skills were a great complement to her own, allowing for her artistic vision to really take form through Lima’s designs.

“Pedro really is a one-in-a-million kind of kid because he is an artist and he’s also very smart with how to construct things, and those two don’t necessarily always go together,” Mrs. Alley said. “We talked more in abstract terms and then he puts them on paper, so it’s actually a lot like how it would be in the real world where a director has a vision for the show and the designer translates that into designs.

“What really impressed me is that I gave [Lima] the script I had chosen and within a short period of time he already had design ideas and was drawing things up before I ever even asked him to,” Mrs. Alley continued. “Typically your set chief waits for designs from the director, so I was really impressed that he took that initiative, and what he had designed really worked for my vision of the story.”

Lima is optimistic that this production will usher in a new era of theatrical excellence for the spring semester productions.

“I have invested an incredible amount of time and effort into making this show as great as it possibly can be, and I know that everyone else in the Advanced Acting and Stage Tech classes have as well,” Lima said. “With this amount of love for the production and the amazing progress we have made, there is not a way that this show will be anything other than amazing.”

Lima aims to continue studying theatre in his future, aspiring towards a BFA in Theatre Production and Design. He has not yet decided where he is attending college, but he says he will likely be in either Memphis or New York City.

“I always remember how [musical theater teacher] Mrs. [Leann] Dickson would ask ‘What are you doing with your life?’ And then seem really pleased when I responded ‘This!’” Lima said.

Arabian Nights is showing April 21-23, and tickets are on sale now at beardentheatre.com.