New blanket trend weighing students down – but in a good way, they say 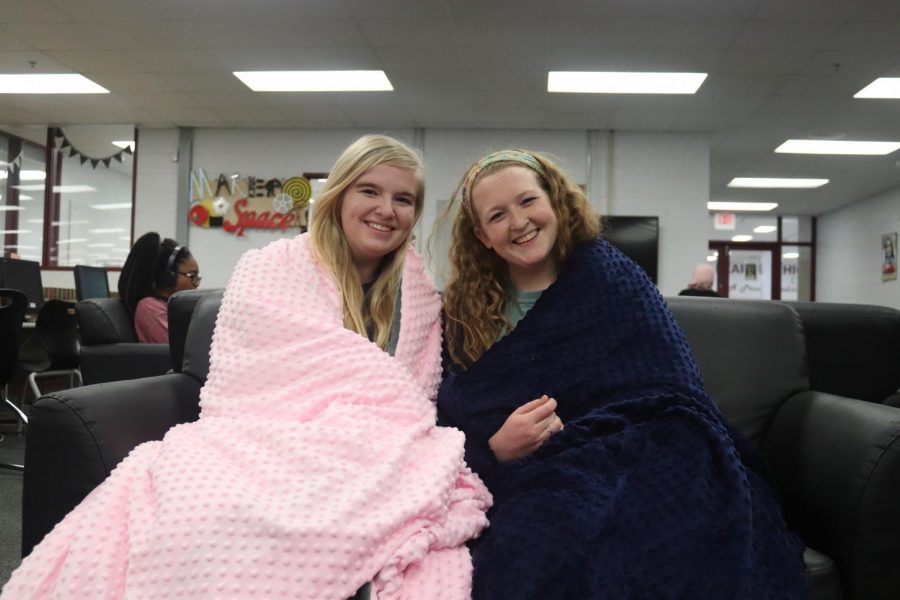 Holly Walker and Lydia Steimer are completely on board with the new weighted blanket trend.

One of the most popular Christmas gifts of 2018, weighted blankets have become a trend not only on the global scale but also among teenagers, including Bearden students.

Dating back to 1999, these blankets come with built-in weights of varying sizes; they can be as thick as a comforter or as thin as a throw blanket.

An article in The Washington Post reported that Gravity Blanket, a company that sells them, recorded over 16 million dollars in sales in 2018, illustrating their growing popularity. Other sites that sell them saw sales of weighted blankets double. Bearden students have contributed to the spike in sales last year.

“I have always felt like I need weight on me when I sleep,” senior Lydia Steimer said. “I would always sleep with a huge comforter even when I was hot because I wanted the weight on me.

“I wanted a weighted blanket so I could have that same feeling without a huge comforter.”

Steimer is one of several Bearden students who own one.

Although rather expensive, with prices ranging from about $50 to as expensive as $300, they are regarded as tools to help relieve stress, anxiety, and even insomnia.

“They can be quite expensive based on the weight itself, but the perks are there,” junior Holly Walker said. “I really feel like you get what you pay for; If you are willing to spend a little more, do it.”

They have even been used to help children with autism and are highly recommended, according to Autism Parenting Magazine.

Weighted blankets have been used by therapists for treatment of patients with anxiety disorders through sensory integration therapy, which involves deep pressure touch stimulation. An experiment conducted in 2008 by Occupational Therapy in Mental Health and reported on in LiveScience found that 19 out of 33 adults felt more relaxed after only five minutes of using a weighted blanket.

“It is so comforting to be under,” Steimer said. “Also, when I am really stressed and having trouble sleeping, being under a weighted blanket just reminds my body that it is time for sleep, and that is so comforting.”

The science behind the stress relief lies in the reactions it causes in the nervous system. According to Medical News Today, the gentle, slight pressure weighted blankets provide can release serotonin and dopamine in the brain, the hormones responsible for creating feelings of happiness and relaxation. This pressure can also kick into gear the body’s parasympathetic system, which helps put the body into a state of rest after stressful situations. Medical News Today also says these blankets stimulate the same feelings as a hug, which can reduce blood pressure and induce relaxation.

Bearden students have noticed the differences their weighted blankets have made.

“It is so nice to come home from a hectic day and crawl under the blanket,” Walker said. “It definitely does ease your stress.

“Plus, it weighs you down and keeps you in place, providing a deeper sleep.”

The weights of the blankets come in increments of five, and it’s suggested that people buy one that is about 10 percent of their body weight. SensaCalm recommends buying based on body size, not bed size.