Stage production of ‘The Odyssey’ stays faithful to original epic, but with some modern touches 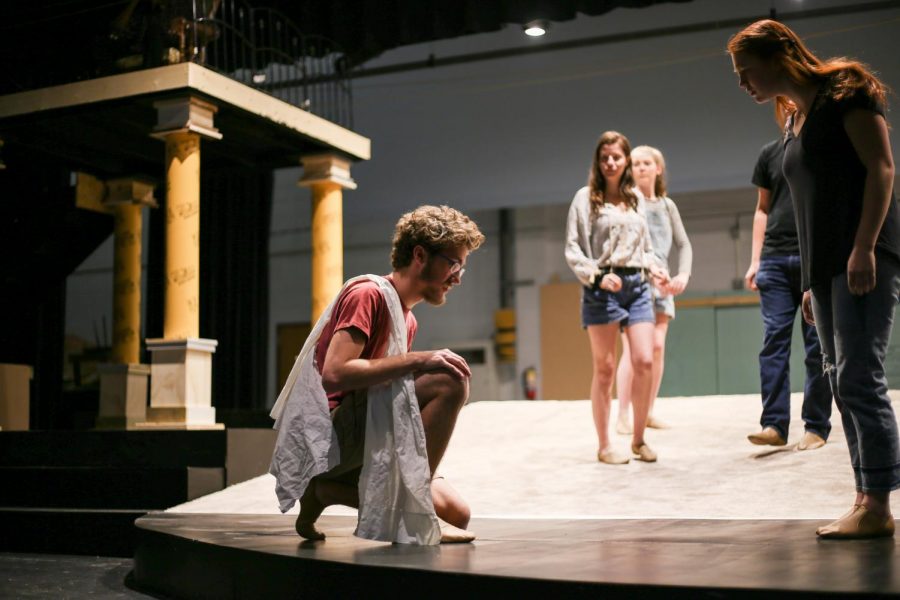 Seth Reynolds (Odysseus) kneels before Becca Siegel (queen of Phaeacia) during rehearsal for Bearden's production of The Odyssey.

No Bearden student can leave its halls without having first studied The Odyssey as a freshman.

Because of the emphasis placed on the story in the English curriculum, audiences will be able to have an immediate connection with the story.

The theatre department used a script adapted by Mary Zimmerman for the stage from an earlier translation of the work by Robert Fitzgerald. Although the play keeps the Ancient Greek setting and costumes, Zimmerman has inserted jokes and references that will appeal to modern audiences.

“[Zimmerman] added a lot of different themes into it that are not in the original, so it’s really cool to have a new take on it to get [another] side of the story,” said senior Billie Williams, who plays, among other roles, Penelope, the wife of Odysseus.

The main components of the story, as well as its most memorable moments, have been preserved in the play. Many of the events, such as the cyclops and Circe, are presented as a “story inside a story,” with Odysseus in the “present day” telling the story of his journey to the Phaeacians. This is faithful to the original work, which also involves the main story being a re-telling of it by Odysseus to his hosts.

Some elements were chopped out due to the time constraints of a 2.5 hour play.

Additionally, Zimmerman altered the personalities and behaviors of characters, notably Odysseus himself, in order to reduce the level of violence and make the play more appetizing for the audience.

“Odysseus in the play version is a little more likeable for our audiences,” director Ms. Katie Alley said. “He’s not quite as brutish and arrogant as he might have been in the original where they just kill everybody basically.”

Teachers hope that a live staging of the work will engage students more than simply reading words off a page or watching a movie.

“I am so excited that they are performing a piece of literature that kids actually read,” said Mrs. Kelley Davis, who has taught The Odyssey in the past in both her English I and Mythology classes. “Live theatre is so different than watching a movie.

“The Odyssey is timeless because we all struggle to get home – as we search for what ‘home’ really is to us – and conquer our monsters, varying from apathy to lust to gluttony to hubris, and we all can connect through the shared experience of a performance.”