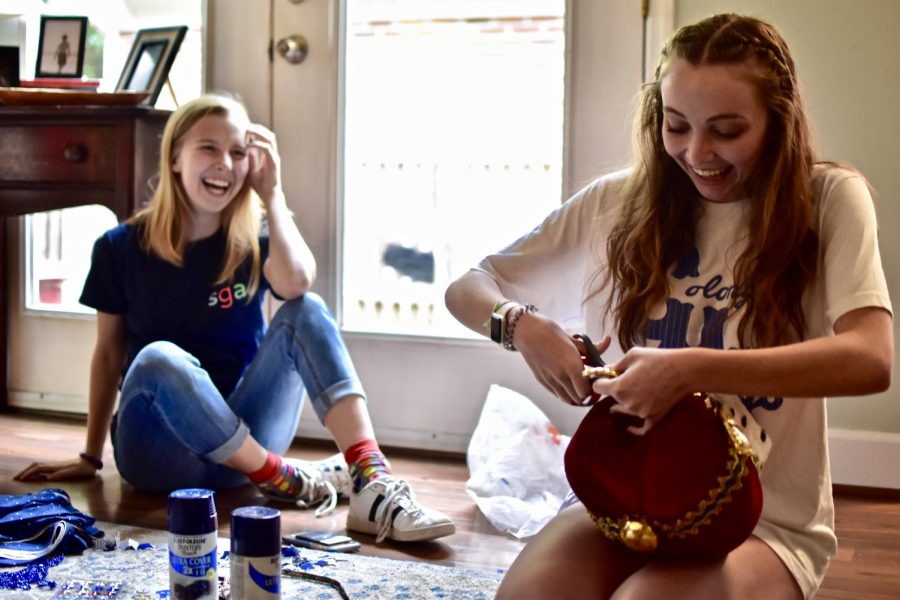 Bearden and Farragut’s SGAs have come together to introduce a new element to the West Knoxville rivalry – the Kingston Pike Crown – just in time for the football game on Thursday.

It began when Farragut’s SGA president Audrey Richards became inspired by a friend who attends Clarksville High School in Middle Tennessee. After each rivalry football game, the winning team is awarded a shield and gets to keep it for the year until the next football game.

“[The rival schools] are connected by a road called Warfield, so they give away a shield to the winning team each year,” Richards said. “The game really unites Clarksville High School as a student section.”

Richards then contacted Bearden SGA president Abby Ann Ramsey, and together they came up with the Kingston Pike Crown, named for the road that connects the two schools.

“The crown symbolizes the rivalry of Bearden and Farragut as half of the crown is decorated as each school,” Richards said. “It also celebrates how we are all united in a way.

“There is a seven on the crown that shows we are only seven miles apart and that Kingston Pike unites us at the end of the day.”

This year’s game is Thursday at Farragut at 7 p.m. It’s WVLT’s Rivalry Thursday game this week.

Since Bearden won 17-13 last year, the Bulldogs will start with the crown. Every year at the rivalry game, the student section leaders of the reigning school will present the crown to their football team. The winning team will then keep and display the crown for the year.

Furthermore, a gem will be added to the crown after every game – maroon gem if Bearden wins and a blue gem if Farragut wins.

“It brings a lot more school spirit to the students because it adds another aspect to the game,” senior Bearden student section leader Nick Doty said. “Now there is a reward for winning, so students can take pride in having the crown for a year.”

Both Ramsey and Richards are hoping that the crown will unite the schools while using friendly competition to promote school spirit.

“I think that any time we have some sort of competition with Farragut, people really jump on board,” Ramsey said.

Added Richards: “The crown should promote school spirit by giving each school a common goal. Football serves as a way to bring every student together for the same goal, cheering on their school to help them win, and the crown symbolizes this is in a much more apparent way.”