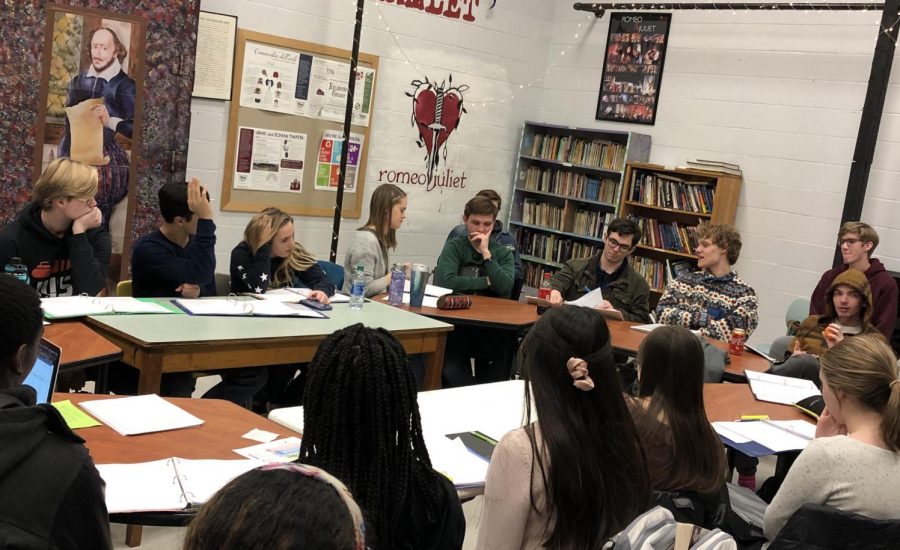 The Grapes of Wrath cast completes a table read during class this week.

As spring semester picks up, Bearden’s advanced acting and stage tech classes are jumping right into preparation for this April’s production of The Grapes of Wrath.

The cast list, which was announced Thursday evening, recalls many familiar faces to the spotlight and introduces new exciting talent. Senior Ben Barber was announced as Tom Joad and senior Jesse Mullins as Jim Casy. Senior Lauren Rymer is also making her Bearden advanced acting debut with the supporting lead role of Rose of Sharon Joad.

The story, which is an adaptation of John Steinbeck’s Pulitzer Prize-winning novel of the same title, follows the Joad family and Jim Casy, a retired preacher, as they travel to California in search of work during the Dust Bowl.

“All of us will be exposed to a ‘realism’ technique in this show that focuses on the relationships the characters build and the way they think,” Barber said.

In previous Bearden productions, Barber has played extremely animated characters like Moonface Martin in Anything Goes and Bobby Child in Crazy For You. Tom Joad, however, is a much more real character that Barber will have to explore in depth.

“My biggest challenge will be digging deep into [Tom’s] physical engagement and what makes him himself,” Barber said. “He has got to be on his toes, hungry, and desperate enough to leave his only home, so I have to find a way to show that in a way that feels real to the audience.”

In the show, the audience experiences all the trials the family faces on their journey to California and learns important messages about persistence and family.

“Casy is such a different kind of person than characters I have played before,” Mullins said. “But it will be a fun challenge to become such a wise character and channel his energy.

“[There are] so many cool moments that show how far he’s willing to go for people he cares about.”

Rymer also spoke on her experience preparing for such an interesting role.

“[Rose of Sharon] is a very interesting character for me because she’s my age but going through such a different, significant life event,” Rymer said. “She is pregnant and moving across the country with her entire family and hardly any money.

“The biggest challenge will be finding a relationship between her life and mine to really sell the role.”

The show, which incorporates heavier concepts and is much more emotional than past productions put on by the department, will immerse the audience much deeper into the story and the life of each character.

To help aid in the intimacy of the show, director Ms. Katie Alley is limiting seating to just on-stage chorus risers so smaller audiences will be able to experience the show more personally than possible in a full auditorium.

The close proximity to the audience poses challenges for the actors to seriously commit to scenes and emotions, but the reward will ultimately be the stretch this show provides.

“Ms. Alley has challenged us all with the intensity of the show, so I will be happy to add that as another tool I can use as an actor,” Barber said.

Added Rymer: “As actors portraying situations we’ve never experienced, there is a tendency to make everything dramatic. Here, we can show big emotions so much more delicately because the audience is right there with us.”

Tech crew is also working hard to put on a great show for the audience by creating a great set design and appropriate time period props and costumes for viewers to enjoy.

Tickets for the show, which will be performed on April 23, 24, 25, and 26 at 7 p.m., are not open for purchasing yet, but will become available at www.beardentheatre.com as the semester progresses. Stay tuned to Bearden’s BBN and The Bark for more updates on the production.