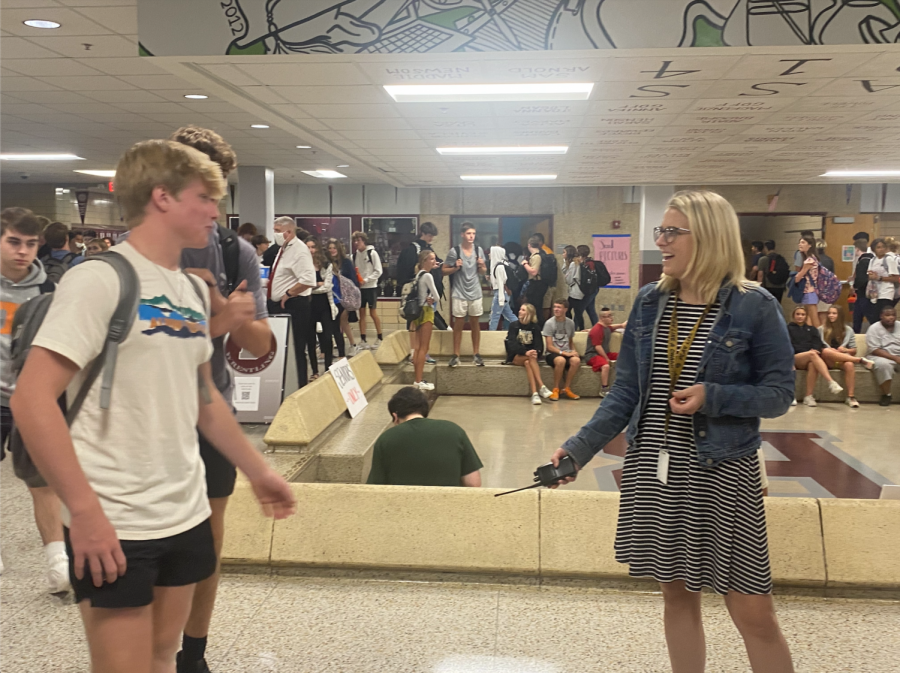 This year’s freshman class entered Bearden with a commonality with their grade level assistant principal – she is also brand new to the Bearden community.

Mrs. Denise Watts prioritized ensuring that incoming freshmen felt welcomed into the Bearden community and ready to start the year strong, primarily by heading up freshman orientation with the help of several other key staff members.

“I hate to take sole credit because everybody did so awesome stepping up and doing what was asked, so that the kids could have a great day,” Mrs. Watts said. “It was a fun morning.”

Mrs. Watts was appreciative of all of the groups throughout Bearden – cheer, band, student mentors – helping to make the day special for the freshmen. Mrs. Watts firmly believes that freshman orientation would not have been possible without the staff’s help.

“I organized it with some very key people,” Mrs. Watts said. “Mrs. [Meshon] Crateau helped me get in the cheerleaders.

“I had to get a lot of people to bring in everybody, like Mrs. [Amy] Davis in the library for Key Club, Ms. [Angelia] Ford with the mentors.”

Principal Mrs. Debbie Sayers was pleased with how freshman orientation went and plans to keep it in the future. Mrs. Watts reached out to teachers making sure they were prepared for the day.

“She sent out a super organized email that had all of the different times and locations and what was gonna happen at each of those locations,” Mrs. Sayers said.

Mrs. Sayers is excited about the positive energy that Mrs. Watts is bringing to the staff at Bearden.

Mrs. Watts does find it challenging to integrate into such a large school community. She has been making steps to make connections with the students.

“I am very, very big on relationships with students,” Mrs. Watts said. “Speaking to students in the hallways and when I see them, just letting them know school is a place they’re safe.

“At Austin-East, I didn’t know everyone’s name, but I knew something about them. Here, that’s almost impossible, but I’m really trying hard.”

As part of making connections with her students, Mrs. Watts spoke to the Bearden marching band’s leadership team during their band camp about conflict resolution.

“I think that would be really cool to do with other teams or clubs,” Mrs. Watts said. “Or anybody that might have a group of teenagers together that might have some type of conflict.”

When Mrs. Watts is not working, she enjoys spending time with her daughter and listening to a lot of Taylor Swift. She once got to go backstage because of a viral video of her daughter.

“I’ve been in education for 17 years, and I wouldn’t want to do anything else,” Mrs. Watts said.