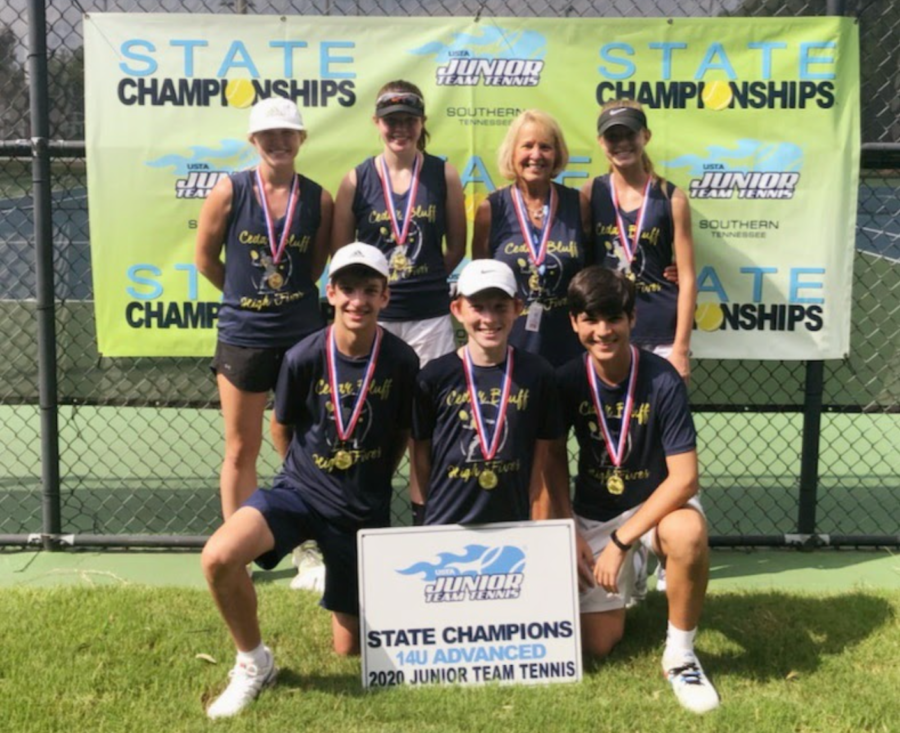 New Bearden tennis coach Dana Forsyth poses with a group that she coached to a junior team tennis state championship.

Dana Forsyth had no intention of playing tennis.

The area of East Knoxville in which Forsyth grew up in wasn’t necessarily known for its tennis programs and opportunities, and her parents didn’t play either.

“There was no reason I should have been in the sport, except it was what I was meant to do, born to do, my passion – and I love it,” Forsyth said.

Forsyth, a USPTA Elite Certified Professional who has taught at Tyson Park and Holston Hills Country Club for 19 years each, will now bring that passion to Bearden’s tennis program as the new coach.

Forsyth is hosting a meeting for interested players Thursday at 6:45 p.m. in the library.

Motivation struck for Forsyth in 8th grade when her brother went down to a local tennis court for a casual game of tennis with a friend. Inspired by her brother, Forsyth asked her dad to buy her a racket for the first time – a $3.99 wooden Quinn racket – that she could bring to her future high school to practice tennis.

She then went down to the high school where she would soon start her freshman year and began hitting balls against the wall of the school. This was the first time Forsyth had ever hit the ball – her first hit of a 63-year career.

Forsyth’s talent was noticed when a high school P.E. teacher saw how hard she was practicing outside of school.

Her school didn’t have a tennis team at that time, but that gym teacher formed one because of her motivation and dedication.

“That teacher put me on the path,” she said. “I’ve been on the path all these years.”

Over her career, Forsyth has had many accomplishments to show for her endless hard work. As a player, she was inducted to the Knoxville Sports Hall of Fame and the Tennessee Tennis Hall of Fame.

At one time, she was ranked No. 1 in Tennessee and the Southern section in singles and doubles; in addition, she was the Tennessee Tennis Pro of the Year.

Forsyth has not coached a high school program before, but she has worked with high school players from all schools for 30 years, including players that go to Bearden.

“I’ve known Coach Dana for almost as long as I’ve been playing tennis, so I’m very excited to have her on board,” senior Eli Williams said.

Beyond teaching the sport of tennis, Forsyth wants her coaching to reflect on the players in the real world, not just on the court.

“I want them to learn life lessons because probably none of them are going to be professional players,” Forsyth said. “They’re going to be out in the world.

Forsyth easily bonds with her players from all of her club players. She is looking forward to joining the tennis community at Bearden.

“I’m most looking forward to meeting the students, getting to know their passions, their talents, and whether, you know, they like drama or music or play an instrument or are good at IT work,” she said.

Although having never set foot in Bearden High School, Forsyth has close ties with several players at Bearden, one of the most notable being former Bearden tennis head coach Sam Greeley.

Greeley’s parents brought him to Forsyth for private lessons when he was in elementary school. He went on to star as a player at Bearden High School before serving as the Bulldogs’ head coach through the end of last season.

“My goals are for every player to have an enjoyable experience, win or lose, and to put winning and losing in the right perspective,” Forsyth said. “Put progress above that.

“If you’re better two or three months from now than you are right now, be happy with that knowing that the progress will continue as you keep working.”

At Thursday’s meeting, she will look at player experience, but she also understands the challenge of learning tennis, as she did so many years ago.

“It takes about three years to just be able to keep the ball going back and forth and kind of direct it where it’s supposed to go,” Forsyth said.

Forsyth’s knowledge of tennis opportunities, such as clinics, group lessons, and private lessons in the Knoxville area will benefit her players at Bearden, whether they make the team or not.

TSSAA rules state official practices can only begin after the first of the year. The 13 to 16 matches the team plays begin in mid-March, and then the season continues through the first week of May.

“I am super excited to meet the new coach,” sophomore Sadie Maierhofer said.

Added senior Todd Morgenegg: “Although our season starts in the spring, I’ve met her. Coach Dana is the flavor our team needs for sure.”