Staff picks: Who should play Batman (instead of Affleck)? 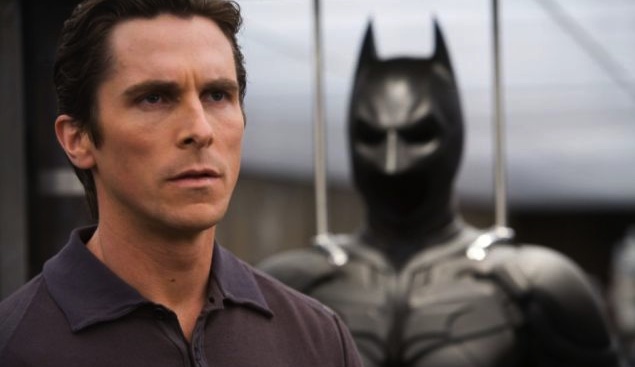 By the look on his face, Christian Bale clearly can't believe anybody would think Ben Affleck was the right choice to replace him.

Editor’s Note: Love it or hate it, Man of Steel made a lot of money. So much so, in fact, that it took a matter of a couple of months after its release for Zack Snyder and Warner Bros. to announce its sequel, a feature that will pit Superman against Batman. With Christian Bale having departed from his acclaimed starring role in Christopher Nolan’s Dark Knight trilogy, the DC/WB team has selected Ben Affleck to fill the position. It’s a casting that’s generated much controversy, mostly from people who choose to remember Affleck from his much-maligned Daredevil rather than from Argo or Good Will Hunting or Dazed & Confused. That controversy got us thinking: who would be the ideal Batman? Warning: This list contains some The Dark Knight Rises spoilers (but if you still haven’t seen it, do you really care that much/avoid your friends who have seen it that much?)

Unlike the majority of the looks-focused, made-by-Hollywood “hunks” he gets lumped in with, Ryan Gosling has actually been able to perform outside of the shadow of the chick flicks (i.e., The Notebook) that launched him into stardom. Much of his success can be attributed to his impressive range as an actor: it’d be hard to mention a quirky romantic comedy like Lars and the Real Girl and a dark, highly stylized thriller like Drive in the same breath, other than to say that Gosling is brilliant in both. While the subject matter and tone of his movies often differ, one thing that Gosling often brings to the table is a thoughtful, solemn characterization, something essential to a portrayal of the Dark Knight. Meanwhile, his urbane coolness makes him an ideal Bruce Wayne. Of course, it’s doubtful at this point that we’ll ever see Gosling in bat ears, but maybe it’s all for the best – let him save his talent for Nicolas Winding-Refn and Derek Cianfrance rather than wasting it on Zack Snyder’s messy action sequences. [Jack Evans]

I have to confess something. I have not seen any of the Batman movies and know little to nothing about the whole franchise; not that I’m purposely avoiding it, it’s just that there never seems to be any time to watch them. So, that being said, my vote for who should have replaced Christian Bale as Batman has no real validity. In the vague perception of Batman that I do have, Matt Bomer would have been a great replacement. He’s suave, charming, and has a strong jawline that would seem to look good in that mask that looks really uncomfortable. [Kelsey Kinzer]

So, I know that half of you readers will disagree with me on this, but Joseph Gordon-Levitt should be the new Batman instead of Ben Affleck. It just makes sense. I know the name of his character at the end of The Dark Knight Rises was revealed to be Robin, but why not have the sidekick replace the real superhero? It wouldn’t be the first time Hollywood put a twist on a well-known plot, and doesn’t it make sense for the replacement of a superhero to be the sidekick who knows all the moves? [Hannah McElroy]

To play Batman, you have to have more than just the deep voice. You have to have the classic Bruce Wayne tough guy look. I think that Daniel Craig fits that bill. Anyone who has seen any Daniel Craig movies knows that he is a pretty expressionless actor; the guy doesn’t do a lot of smiling. That reputation should have qualified him for a chance at the Batman part, seeing that the two have a lot in common. [Graham Benefiel]

So apparently Superman and Batman are paring up for yet another summertime blockbuster. Superman will be played by the hunky Henry Caville and Batman will be played by Ben Affleck…..wait, who? We all know that Christian Bale (who, in my opinion, was the best Batman of all time) said he wouldn’t do another movie with the ingenious Christopher Nolan. Before the Nolan series, Batman movies were chalked up to be pretty horrible pieces of work. One look at the trailer for the George Clooney-starring Batman and Robin and you know how bad that movie was. So my idea is, hey, why not let Clooney redeem himself? Clooney is not too old and is still in good enough shape to do an action packed movie. Plus, he is a familiar face to Batman fans everywhere, and that would be much better than introducing a totally new face to the Batman persona. [Litza Craig]

If anyone had to replace Christian Bale as The Batman, I think it would have to be Ewan McGregor. I mean, if anyone is going to be able to ride the Batmobile’s escape pod motorcycle, it’s got to be the man who rode a motorcycle from London to New York… heading East across the entire world! And, hey, who says The Batman can’t be a ginger? He wears a mask, right? [Ed Dudrick]

The Battle of Hogwarts is over, and his kids are off in school; what could be more perfect than if Tom Felton became Batman? He already has that dark-side character going for him. Put him on the good side and he’s unstoppable, especially with his experience in magic. Plus, that accent is enchanting. [Allie Gruszkiewicz]

Chuck Bass should be Batman, but not because I’m partial to strong male leads (I also was not allowed to pick Christian Bale). Chuck Bass as a character, not as a fantasized-over, girl-obsessed actor, would be an exceptional choice. As a well-off, educated character, he’d certainly have to clean up his act and drop the huge ego. Perhaps he can have an “It’s not who you are underneath, but what you do that defines you” kind of moment. Obviously, if you are a fan of Gossip Girl, I’m talking about the original CB. [Taylor A. Johnson]

No one person could adequately capture all of Batman’s versions, all individual to distinct periods in Batman’s timespan. From his enthusiastic early years to his later periods, Batman gains years of experience and discipline. A fervent, vengeful youth evolves into a mature, refined, yet endured character with complexity and depth.  Not many actors can convey Batman’s intricacies, and few seem to trust Ben Affleck with the job.  Personally, I think Denzel Washington is the most adequate choice to be an older, more developed Batman.  His age and appearance are perfect. His better years are behind him, but he’s hasn’t fallen to weakness yet.  Denzel is solemn without being depressing, determined yet reserved. He has an expression of a man who has seen more than he wanted to. He’s intimidating and masculine enough while still being refined and classy. Ruggedness would clash with Batman’s elegance and sophistication. [Helen Law]

Trying to find someone who can live up to Christian Bale as Batman is arduous work, but nonetheless, it must be done. So, if we must replace this outstanding man, it has to be done right. Armie Hammer is the way to go. In his most recent endeavor he played The Lone Ranger, a masked vigilante in pursuit of stopping the railroad company from potentially causing a civil war all while trying to win the heart of his long time love. By this we can tell that he is capable of playing a dashing, clever hero (not to mention, he can pull off a mask). But does he have the suave sophistication to portray the ever handsome Bruce Wayne? The answer is yes. His mischievous smile and devilish good looks will melt the hearts of all the girls who look at the screen. Clearly, Armie Hammer is the best bet to follow in the footsteps of a legend. [Zoey Line]

Les Miserables proved that Aaron Tveit is just as good on screen as off. His obvious next step is to star in another movie, such as the new Batman movie. He has a beautiful voice and it would sound awesome coming out of the Batman mask. And, from his switch on Broadway as Frank Abagnale in Catch Me If You Can to Enjolras in Les Miserables, his move from stage to screen was flawless. [Katie Matthews]

Imagine: you’re standing in a dark alley. Suddenly, someone attacks you. All hope is lost until a masked figure appears. It’s Batman, coming to save the day. He looks at the attacker and says in a deep, familiar voice, “You chose the wrong day.” It’s the voice of Professor Severus Snape. Now again, imagine: Alan Rickman as Batman. I can’t imagine a single thing more terrifying than that voice coming out of that costume. Criminals wouldn’t stand a chance. [Emily Price]